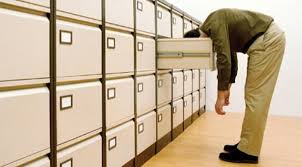 One of the worst things UnumProvident ever did at the time of the 1999 merger was to do away with the “policy room”, which was a paper accumulation of original policies sold to employers and insureds. Eliminating original copies of policies, particularly the newly gained Provident/Paul Revere originals was a major error on behalf of the Harold Chandler henchmen.

The idea, of course, was to transfer paper documents to electronic data files. However, that data exchange failed and from the information I have Unum’s archives of original policies do not contain original copies of policies Unum has been trying to adjudicate ever since.

Insureds are always sent “SPECIMEN” OR “DRAFT” copies of their policies when requested, but today I was informed someone from Unum actually “drafted” an insured’s policy from other Paul Revere policies, or who knows where. This is really unbelievable, because putting forth a drafted policy from many different sources as “the policy of record” would probably be considered fraud, and of course, it wouldn’t be enforceable in a court of law. The so-called “drafted” policy didn’t contain any signatures or the name of the insured I’m told, and yet Unum is still trying to adjudicate the policy as if it were the original contract.

From the time UnumProvident did away with the policy room to now, I’ve had multiple requests and calls from insureds and attorneys discussing the fact that Unum can’t seem to produce original disability contracts, in particular the Paul Revere and Provident policies handed over at the time of the merger. One of the Vice Presidents signed an affidavit stating a Paul Revere Policy had been “reconstructed.” What?

Just yesterday a new DCS client called Unum Group to give notice of claim. After 13 different people he was told that there was no record of his policies even though he provided the policy numbers. My client said, “I know I’ve been sending the premium checks, where in the heck is the money going?” Good question.

My guess is that Unum doesn’t know. I’ve known for quite some time now that Unum’s underwriting and billing departments have problems keeping track of premium billing and FIOs (Future Increase Options). Ultimately, letters do not go out to insureds the way they should informing them of their rights under the contracts. But then, it makes sense this wouldn’t happen if the original policy contracts are “missing in action.”

This is a pretty serious problem. DUPLICATE, RECONSTRUCTED, SPECIMEN policies are not enforceable. When Unum cites definitions of disability and other provisions in letters to insureds/claimants, its probable the information documented isn’t accurate at all. There is every indication that Unum still uses the drop down template citations in their letters to insureds. If this Windows data base hasn’t been updated there is no guarantee that the provisions cited in letters are actual Plan or policy provisions that apply to each insured/claimant.

Due to the known uncertainties of policies lost, it seems reasonable that claimants and insureds (and agents) need to take special care to safeguard copies of policies that were originally delivered to them. The old IDI policies in particular are “unknowns” and Unum may be “punting in the wind” trying to reconstruct policies it just can’t find.

Has it occurred to anyone at Unum that “reconstructing a policy” potentially worth millions in financial reserve and putting it forth as the original contract of record might be illegal? I have no idea where the “reconstructors” are pulling provisions from, but I suspect they might be using standard provisions usually found in certain policies, such as Paul Revere and Provident.

Let me reiterate – this is a very serious problem that will no doubt lead to punitive damages awarded in the various states as attorneys wake up to the seriousness of the problem. At least one attorney informed me he’s filing charges of fraud and other criminal charges allowed in his state.

One final thought. The affidavit I read validating a reconstructed policy was given by a VP of Risk? What? What does “risk management” have to do with reconstructing policies. Now, I’m really intrigued. Even if Unum wanted to “reconstruct” a policy, it should have come from the underwriting department, not risk. Unum just put a dagger into its own foot.

In the meantime, I strongly suggest that Unum insureds safeguard their policy copies because they may not be able to obtain the same policy copies from Unum Group. Or, what they do get as a copy is a conglomeration of company standard policy provisions that insureds never saw, never agreed to, and clearly aren’t paying premium for.

What a mess! Unum can’t enforce or adjudicate what it can’t find.